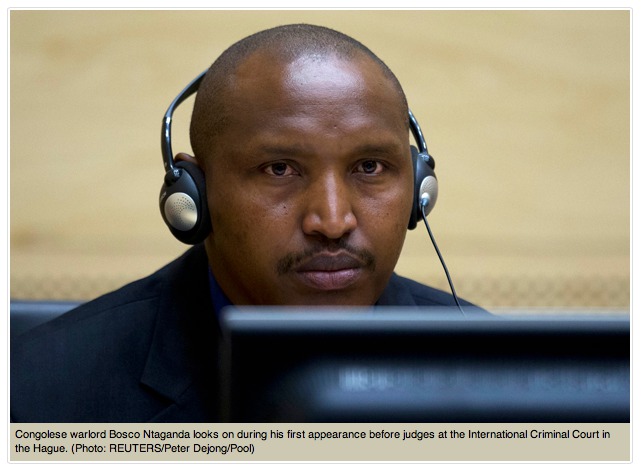 Bosco Ntaganda is a suspected warlord and key figure in the conflict in the eastern Democratic Republic of Congo (DRC). The ICC has issued two arrest warrants against him, one in 2006 and the other in 2012, for international crimes including rape, murder and the recruitment of child soldiers. The arrest warrants concern crimes committed in 2002-2003, however he has continued to be active in the region. More recently Ntanganda is thought to have headed the M23 rebel group, which took the DRC city of Goma last November.

On 18 March, Ntanganda walked into the US embassy in the Rwandan capital and handed himself in, requesting to be transferred to The Hague. However, neither of the parties directly involved in his surrender are party to the Rome Statute which established the ICC, and are therefore not obliged to cooperate with it. Despite this, within days there were ICC representatives in Rwanda to facilitate the transfer, and on 22 March Ntaganda arrived in The Hague.

The only legal provision which is designed to cover such situations is Article 87(5)(a) of the Rome Statute, which reads as follows:

The Court may invite any State not party to this Statute to provide assistance under this Part on the basis of an ad hoc arrangement, an agreement with such State or any other appropriate basis.

This article provides a flexible approach to cooperation between the ICC and non member States. It allows for anything from a formal agreement to an informal arrangement. Such flexibility is important given that a number of politically sensitive issues can arise. It is clear that some form of cooperation has taken place, given that an ICC delegation was sent to Rwanda to take part in the negotiations between the governments of the US, Rwanda and the Netherlands.

The willingness of the US to cooperate with the ICC is perhaps unsurprising. While originally hostile towards the Court, under Obama, the US administration has had a more positive approach. This is evident from the UN Security Council referrals of the Darfur and Libya situations to the ICC. Rwanda however is in a more complex position. Its cooperation with its ‘own’ international tribunal, the International Criminal Tribunal for Rwanda (ICTR), has been fractious. Furthermore, there are allegations that Rwanda is involved in the conflict in the eastern DRC, in particular backing the M23 rebels. As such Ntaganda may implicate Rwanda in his testimony before the Court.

It is not at this time known whether the cooperation between the parties involved in Ntaganda’s transfer to the ICC had a legal basis in the Rome Statute, or merely a political one. In this sense it is true that the situation is not a typical instance of shared responsibility, given that the actors involved do not owe a legal obligation to cooperate or to surrender Ntaganda to the ICC. However, it is an interesting instance of cooperation between multiple international entities. The absence of a strict formal framework may best cater for these types of shared responsibility (using this term loosely) situations, given the potential political difficulties: there may have been a formal agreement or an informal arrangement, both can be accommodated within Article 87(5)(a). What it clear is that cooperation in this instance of shared responsibility was successful, despite the US and Rwanda not being signatories of the Rome Statute.