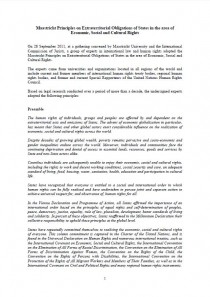 Until recently, most of the discussion focused on instruments which by and large contain civil and political rights (CP rights). This can perhaps be explained by the simple fact that these instruments have explicit jurisdiction clauses and, quite importantly, also have international supervisory bodies competent to decide on (individual) complaints, thus creating a body of case-law on the subject. Therefore, a lacuna was filled when in 2011 a group of experts adopted the Maastricht Principles on Extraterritorial Obligations in the Area of Economic, Social and Cultural Rights. The Principles aim to elucidate the legal framework in which economic, social and cultural rights (ESC rights) apply extraterritorially. At the end of 2012, six of the experts published a Commentary to the Principles, seemingly trying to mimic the working method of the International Law Commission or UN human rights treaty bodies in elaborating on a set of standards by issuing an interpretative document. This blog will discuss two elements of the Commentary’s rich content: the use of the concept of jurisdiction and the question of allocation of obligations among multiple states.

The concept of jurisdiction in the Commentary

The International Convention on Economic Social and Cultural Rights (ICESCR) is an exception to the rule that most human rights treaties contain jurisdiction clauses. However, apparently convinced that the term jurisdiction offers a useful tool to delimit a state’s extraterritorial human rights obligations more generally, the Maastricht Principles give it a central role. The Committee on Economic Social and Cultural Rights is not yet competent to decide on individual complaints, meaning a lack of case-law. Nor has it explained how the term jurisdiction relates to ESC rights in, for example, its General Comment 3. It is remarkable and questionable, therefore, that the Principles are pinned on this concept regardless. The Commentary to Principle 9, literally dealing with the ‘scope of jurisdiction’, simply states that jurisdiction has ‘notoriously’ served as both a threshold criterion and basis for human rights obligations extraterritorially.

Furthermore, while the Commentary states that extraterritorial applicability of obligations under ESC rights is broadly similar to CP rights, its progressive tone suggests otherwise. In the Principles and Commentary, jurisdiction seems to be used as a basis to expand a state’s extraterritorial human rights obligations rather than demarcate the limits (see for example Principle 25 and Ryngaert’s comments on EJIL:Talk!). Principle 9 sub a refers to situations where a state carries out authority or effective control abroad, which most closely resembles the interpretation of jurisdiction in CP rights context.  Sub c, however, stretches the concept of jurisdiction to situations where a state ‘is in a position to exercise decisive influence or to take measures to realize’ ESC rights. This ground is included to account for obligations of international cooperation and assistance, which have an important role in the ESC rights context – as will be explained below.

It is not disputed here that obligations of international cooperation and assistance should indeed be included in a framework for the extraterritorial applicability of ESC rights. However, it is unclear why the authors of the Commentary tried to square such obligations with the notion of jurisdiction. Perhaps it would have been less conceptually confusing to label obligations of international assistance and cooperation as universal obligations going beyond a state’s jurisdiction, which is not to say they are not subject to certain requirements and limitations (Principle 10). For now it seems we are left with a fragmented concept of jurisdiction, which has distinct meanings in the context of ESC and CP rights.

Cooperation and the inevitable question of allocation

Article 2 of ICESCR stipulates that parties to the Convention must undertake ‘to take steps, individually and through international assistance and co-operation […] with a view to achieving progressively the full realization of the rights recognized in the present Covenant.’ From a policy perspective, obligations of international assistance and cooperation are based on the realization that ESC rights cannot be realized worldwide without cooperatively addressing certain structural causes of inequality.  As a legal basis for these obligations, academics mainly refer to article 56 in the UN Charter, article 28 of the Universal Declaration of Human Right and finally article 2 ICESCR, sometimes powered by reference to the lack of a jurisdiction clause in the latter treaty. The Commentary also mentions the Declaration on the Right to Development, Vienna Declaration and Programme of Action, and Millennium Declaration, stating that ‘such commitments have implications for the interpretation of the obligations of states under the human rights treaties’ (Commentary to Principle 29 para 2). A strong claim can therefore be made for the existence of binding obligations of international assistance and cooperation for the realization of ESC rights. The Commentary is, however, realistic in admitting that the exact status and content of these obligations to assist and cooperate internationally are not yet agreed upon by states in practice (Commentary to Principle 3 para 7).

The inevitable question following the assertion of international obligations to assist and cooperate is: who should do what? In other words, how are obligations of assistance and cooperation divided and allocated among multiple states? The Commentary takes an interesting stab at trying to offer solutions in this regard. For example, it tentatively brings up the principle of common but differentiated responsibility (Commentary to Principle 30) – a principle mainly used in the area of environmental law as a way to distribute shared obligations on a differentiated basis. The obligations are deemed shared, because imposing them on one state alone would be ineffective if not supported by coordinated action by other states. In turn, the differentiation is based on a state’s past contributions to a problem and current capacities to solve it. The idea of applying this principle in human rights law context is not at all strange, since capacities of states to influence or assist already play a role in the distribution of obligations in extraterritorial context (see for example Commentary to Principle 31). But it would take a great deal of refinement to make it a central principle in ESC rights context.

One of the most novel and perhaps useful elements of the Maastricht Principles and Commentary in this regard, is that it forwards a procedural obligation for states to devise a suitable system of dividing responsibility. This procedural obligation exists alongside the substantive obligation to cooperate. The obligation seems to consist of an expectation that states will enter into deliberations about a system of allocation with other actors in good faith. The Commentary hints at initiatives in the area of developing criteria for allocation and indicators to monitor progressive realization, but leaves open what other options there are to comply with the procedural obligation. One could, for instance, envisage the creation of platform institutions for the coordination of efforts among different actors and policy areas as a crucial part of this procedural obligation (see for example the Committee on World Food Security). As it is currently framed, the procedural obligation seems rather weak, as it is not geared towards a specific goal and is merely a duty of conduct to be tested against the broad standard of good faith. Nevertheless, it will be extremely interesting to see how it develops.