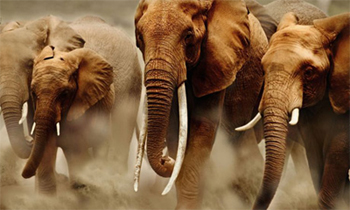 In 1990 Michael Glennon wrote a groundbreaking piece in the American Journal of International Law with the title ‘Has International Law Failed the Elephant?’ The question mark hinted at the possibility that international law had not failed the elephant. And perhaps in 1990 there was reason for hope. African elephants[1] had just been included in Appendix I of the Convention on International Trade in Endangered Species of Wild Fauna and Flora (CITES), meaning the sale of their tusks was outlawed. There was reason for hope that this would limit or even reverse the downward spiral in populations.

In 2013 we can remove Glennon’s question mark. The effect of the ban is undone by unprecedented levels of poaching. Despite massive efforts of some African States to dedicate scarce resources to control and enforcement, population levels are moving downward in a shocking speed. A report published on 6 March estimates that in 2011, approximately 7.4 per cent of the total elephant populations in elephant sites across Africa were killed illegally. Illicit ivory trade activity and the weight of ivory behind this trade has more than doubled since 2007.

However, to say that ‘international law failed the elephant’ is an abstraction. Not international law itself is to blame. In fact, international law provides for high levels of protection. The ban on international trade of elephant parts was complemented by an Action plan for the control of trade in elephant ivory that contains key elements for an effective protection of elephants, including an obligation to prohibit unregulated domestic sale of ivory (this is important, since as long as there is an unregulated domestic market, illegal ivory will find its way). There is much that can be improved in the law – though the direction of development of the law is a complex scientific and political issue. The jury is out on the question whether a full ban offers better chances of survival than a system that protects a legal market for trade, so as to offer financial additional incentives for protection.

But as it is, the problem is not so much with the law as with its enforcement. The cause for the demise of the elephant is a perplexingly large number of actors who together fail to apply and enforce international and domestic law. A recent Elephant Trade Information System (ETIS) report details that the number of actors involved in the killing of elephants is large, and shows that the failure to protect the elephant is a textbook example of a shared responsibility.

The prime responsibility rests with crime syndicates which order to kill and/or kill themselves, and which sell the tusks for large sums of money. There is also an increasing role of rebel movements and militias, for which ivory is the means to pay for their wars and their underlying economic or political agenda. In early 2012, armed groups from the Sudan and Chad killed 450 elephants in the Bouba N’Djida National Park in Cameroon. Also the Lord’s Resistance Army (LRA) has entered the business of poaching.

Behind the criminals and the rebels lies a network of States that fail to enforce the ban. This network includes States that do not do enough to protect elephants within their borders. It also includes States that allow their ports to be used for trade of ivory to Asia, or serve as transit States, notably Tanzania, Kenya, Uganda, Malaysia, Philippines and Vietnam. There is also a group of States that have important domestic ivory markets in their major cities that remain unregulated, including Egypt, the Democratic Republic of Congo, Mozambique and Nigeria. If we were to rank degrees of responsibility, at the top we would locate the two Asian States that allow huge quantities in ivory from illegal trade to be imported: Thailand and in particular China.

In most of these cases there is evidence of inadequate legislation (e.g. in Thailand, which now has made a pledge to improve its policy), corruption and lax enforcement. As to the latter, it is estimated that 90% of all ivory sales in China is illegal. In some cases there are even reports of active involvement in killings. One reported example is a case where a military helicopter of Uganda killed with military precision and in a single raid 22 elephants in the Garamba National Park in the Democratic Republic of the Congo in April 2012.

The Conference of the Parties (COP) to CITES that now is meeting in Bangkok, Thailand has the fate of the elephant high on its agenda. While one may doubt whether the COP will muster political support now that so many actors, including States Parties, are involved in the killing and the trade, the COP cannot duck its own responsibility. It has the mandate to make recommendations to improve the effectiveness of the Convention, and the data available require it to take that responsibility. Indeed, the shared responsibility of the multitude of actors who kill and trade, is matched by a shared responsibility of the 178 States Parties to CITES to act to protect the elephant.

CITES may not have much powers, but it can take action that may make a difference. Perhaps first and foremost, the data that it gathers and publishes exposes in an unprecedented way who is involved in what way in the illegal ivory trade chain. Such exposure of involvement is the starting point for a change in patterns of demand, and for public and political pressure on co-responsible States. The COP also can make findings of non-compliance so as to increase pressure on individual States. It furthermore can recommend suspension of trade in CITES-listed species with delinquent States. There are indications that the Contracting Parties takes this responsibility seriously. Eight States (Uganda, Kenya, Tanzania, Vietnam, Malaysia, Philippines, Thailand and China) indeed were threatened with trade sanctions if they do not address failures in protection against poaching, and failures in seizing illegal ivory trade.

The COP furthermore is given the exclusive authority to regulate ivory trade. It is required not to allow without the most stringent of conditions an operation of a legal market for confiscated ivory, or for ivory from elephants that have been, or will be transferred back to Appendix II. With a seemingly infinite Chinese demand, fuelled by economic empowerment of the masses, that would be a very risky strategy. The unlimited slaughter that preceded the 1990 ban (in the 1970s and 1980s, when African elephant numbers fell from 1.3 million to 625.000 in a decade) should give us more than a little doubt to go back to this situation, given the increased demand. A plan for the current COP to create a ‘Central Ivory Selling Organisation’ that would, outside the authority of the COP, operate a legal market was rightly greeted very critically by many Contracting States and would be incompatible with the powers of the COP under the Convention.

Moreover, CITES can and does seek cooperation with other institutions to combat illegal ivory trade. It chairs the International Consortium on Combating Wildlife Crime (ICCWC) – a collaborative effort that also includes INTERPOL, the United Nations Office on Drugs and Crime (UNODC), the World Bank and the World Customs Organization (WCO), which brings together and coordinates critical expertise. Significantly, even the United Nations Security Council has committed itself to action. In what the CITES Secretary-General called a ‘historic call’, on 19 December 2012, the Council called for an investigation into the alleged involvement of the LRA in the poaching of African elephants, and smuggling of their ivory.

All of this sets the stage for a contest between a network of international institutions, States supporting the plight of the elephant and NGOs on the one hand, and the extensive network of State and non-State actors that constitute the illegal ivory trade chain, on the other. Many will hope for the former coalition to come out on top, but in the given situation, that may take a small miracle.

In my above blog, I noted that eight States (Uganda, Kenya, Tanzania, Vietnam, Malaysia, Philippines, Thailand and China) were threatened with trade sanctions if they do not address failures in protection against poaching, and failures in seizing illegal ivory trade.

In the end, the Conference of the Parties decided not to impose such sanctions. Instead they directed those countries to identify actions and deadlines to ensure progress in controlling illegal ivory trade before summer 2014, with the potential threat that they could face trade sanctions then, if there was no significant improvement in the situation. By that time we may determine whether the parties take their commitment seriously to protect the African elephant. If the eight delinquent States would fail to improve their act and no sanctions would follow, it may well be said that the killings of the elephants is not only a shared responsibility of these eight States, but of the totality of the States party to CITES.

One Response to The Illegal Ivory Trade Chain