Addressing shared responsibility through the regulation of arms trade 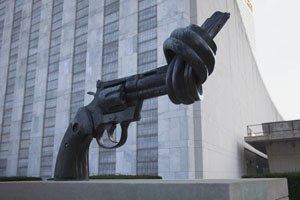 On Monday 18 March, over 150 states reconvened in New York for the United Nations Final Conference on the Arms Trade Treaty (ATT), which will last until 28 March. The ATT aims to regulate the international trade of conventional weapons, and would require states to establish and maintain a national control system to regulate the export of conventional weapons. A final ATT will not obstruct the legitimate trade in conventional weapons, but would address illicit and irresponsible international arms trade. The draft ATT that forms the basis for current negotiations was not accepted during the previous UN Conference in July 2012, when negotiating states failed to reach agreement on the treaty text.

In a statement released before the Final Conference, UN Secretary General Ban Ki-moon declared that ‘It is our collective responsibility to put an end to the inadequate regulation of the global trade in conventional weapons’. During the opening session, he urged states to agree upon a strong international treaty regulating global arms trade, pointing out the absurdity of the fact that common standards for the global trade in armchairs have been established, while to this day international arms trade has remained unregulated at the global level.

Each day, millions of people suffer from the direct and indirect consequences of the irresponsible and unregulated arms trade. At the same time the global arms trade industry is worth tens of billions of dollars each year, and conventional weapons are not only sold but also regularly transferred by means of gifts, leases, loans and military aid. According to Amnesty International a small number of states, including the five permanent members of the Security Council (UNSC), are responsible for most of the world’s transfer of conventional arms. In a briefing published by Amnesty International only a few days before the start of the March 2013 negotiations, it is set out how the permanent UNSC members through the transfer of weapons have fuelled human rights atrocities in for example Libya, Sudan and Syria. Such transfers have occurred through state-owned companies, but are also taking place through companies that are simply registered in the country in question with their operations taking place elsewhere.

This illustrates how the transfer of conventional weapons can lead to classic shared responsibility scenarios where multiple actors contribute to one and the same harmful outcome. The actors involved are, evidently, those that are directly committing human rights atrocities using conventional arms (such as state or non-state armed forces), but also include the companies that are producing and selling these weapons, arms brokers acting as intermediaries, exporting states that are allowing the transfer of weapons to areas where they may be used to breach international law, and transit states that are allowing shipments of arms to pass through their territory.

Dealing with the problem of irresponsible arms trade is clearly complicated by the plurality of actors involved. Adding to this is the lack of clarity when it comes to the obligations of states under international law. Even though some instances of weapon transfer could be covered by the prohibition of aid or assistance in article 16 Articles on State Responsibility, situations that do not concern exclusive state-to-state aid or assistance will fall outside the scope of this provision. Moreover, states are bound by various obligations to prevent violations of international humanitarian law and international human rights law, but the exact content of these obligations remains unclear. It would seem that present international law does not include a general obligation prohibiting the granting of export licenses for weapons where there is a risk that they may be used in violation of international law.[1] Thus, while under current international law states are already to a certain extent required to consider the end-use of weapons they transfer or allow to be transferred (see on this point, A. Boivin, Complicity and Beyond: International Law and the Transfer of Small Arms and Light Weapons), the international legal framework as it stands does not seem to be capable of fully capturing the responsibility of the states involved.

The current draft ATT attempts to address the role that different actors play in fuelling human rights atrocities by irresponsible weapon transfers. Article 4 of the draft obliges exporting states to conduct national assessments evaluating whether to authorize an export of conventional arms. Prior to authorization, a state must assess whether the proposed export could be used to commit or facilitate a serious violation of international humanitarian law or international human rights law. If after this assessment the state ‘finds that there is an overriding risk of any of [these] consequences’, it is not allowed to authorize the export. Companies wishing to export weapons are thus restricted in their (irresponsible) activities by these state-imposed assessments, and arms brokers will be subjected to regulations imposed by states in accordance with article 8. The role of transit or transshipment states is addressed in article 9 of the draft, which requires states to adopt ‘appropriate legislative, administrative or other measure to regulate, where necessary and feasible, conventional arms covered by this Treaty that transit or trans-ship through its territory.’ The text of this provision seems rather weak, and concerns have been expressed about transit and transshipment states not being subjected to the obligations in article 4.[2]

Despite some of its weaknesses,[3] the attempt of the draft ATT to address the role of multiple actors involved in the transfer of conventional weapons should be commended. By obliging states to consider the end-use of weapons that are transferred by actors within their territory, it has the potential of strengthening the duty of states to prevent human rights abuses outside their territory. The adoption of a final ATT would be a welcome step towards establishing and addressing shared responsibility for human rights violations facilitated by the irresponsible export of conventional weapons.

[3] For a review of the text of the draft ATT, see Geneva Academy of International Humanitarian Law and Human Rights, ‘The Draft Arms Trade Treaty’, Academic Briefing No 2, October 2012.